An art installation project will be a feature of this year’s Great Barrier Reef Festival to be held in August.

Immerse, The Whitsundays – The Heart of the Great Barrier Reef” will transform a monumental fig tree on Airlie foreshore into an underwater wonderland as visual focal point of the festival.

The project will include seven workshops to create the installation which is a combination of projected reef-themed animations and upcycled plastic sculptures of marine creatures to be integrated into the tree.

The reef festival committee were thrilled last week when it was announced the festival would receive more than $25,000 to allow the project to go ahead.  Festival Chairperson Margie Murphy said this project would become a reality after the announcement last week from Member for Dawson, George Christensen.  Mrs Murphy said:

We are very excited about this funding and very appreciative of the support from the federal Government.  Planning has already started for the festival to be held August 5-8 and this project will be a special feature.  We are also working on new events and these workshops to create the art installation are the first of the new events that we able to announce. 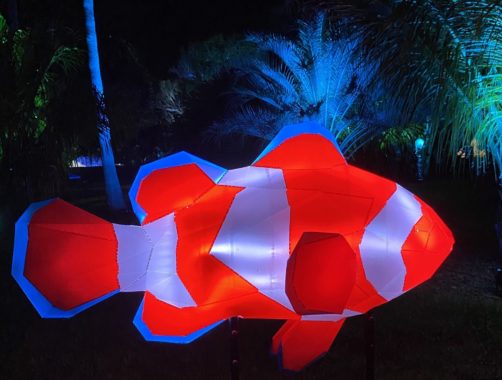 Mr Christensen said he was pleased to announced the funding and that this project would be a central feature at this year’s festival.  He said the funding was part of the latest round of the Festivals Australia program.

The project is one of 16 across the country to receive a share of more than $580,000 in funding to support a diverse range of projects across many art forms including music, theatre and visual arts.

Minister for Communications, Cyber Safety and the Arts, the Hon Paul Fletcher MP, said the grants were critical in supporting regional and remote artists and organisations to build careers and creative partnerships through festivals and community events.

The festival is in it’s 21st year and will feature the regular events including the reef festival parade and the recyclable regatta. Mrs Murphy said:

As Sydney’s Vivid Festival serves to highlight the iconic landmarks and beauty of the harbour city, the aim of ‘Immerse’ is to become Airlie Beach’s annual visual arts attraction, intrinsically linking the region to its destination marketing position – the heart of the Great Barrier Reef.

Mrs Murphy said more information would be available next month for people wanting to become involved in this project or other aspects of the festival.