When David Hutchen started the Whitsunday Reef Festival 19 years ago, little did he know it would one day come of age as the ‘Great Barrier Reef Festival’. In fact, he didn’t know whether it would even survive its first year.  The clock had just ticked over to 2001 and the Whitsundays was rapidly rising to prominence as a Great Barrier Reef destination, but David didn’t feel it was properly recognised as such. Looking to the Port Douglas Carnivale for inspiration he decided what the region needed was an event.

“A reef festival just seemed obvious to me, and it was also obvious we had to do something to get the whole community involved,” he said. With around 200 staff at his Great Barrier Reef operation, Fantasea Cruises, David had the crew to set the Reef Festival afloat. Tacking it on to the popular Airlie Beach ‘Cracker Night’ he knew he would pull a crowd. “Lots of people came from Mackay and Proserpine and Bowen, so it was pretty easy to see we could expand it,” he said.

After funding the inaugural event himself, David found the local business community keen to come aboard.

“I think they thought it’d be an absolute fizzer but when they saw how that first one turned out they wanted to get involved and I reckon they chipped in near half,” he said.  After five happy festival years David sold Fantasea Cruises and left the Whitsundays in 2006.  “The new owners didn’t want to carry on with it and I was bitterly disappointed but what could I do?” he reminisced.

For the next few years the festival was taken on by a committee of passionate locals who faced challenges to keep it going without the same level of financial and managerial backing. Whitsunday resident Margie Murphy was keen to be involved, initially by performing in her band ‘Cactus’ at a festival fundraising show in 2009, which led to her joining the volunteer committee.

“The next minute I was chairwoman,” she laughed.  “It was a struggle without a major sponsor or manager, but the committee I joined weren’t going to give up and it has grown from strength to strength from there.” 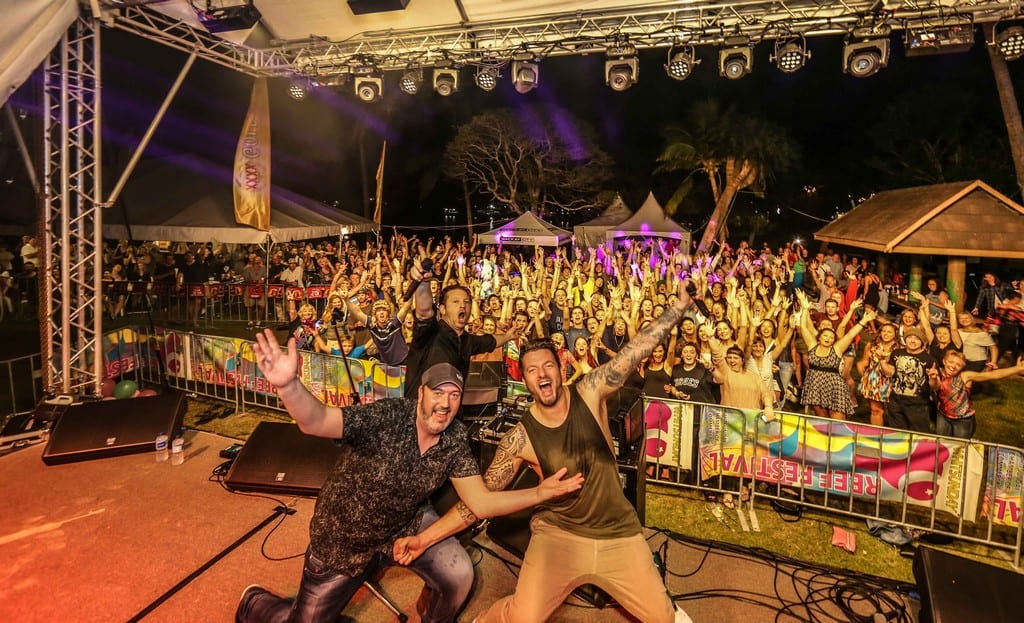 Becoming an incorporated association helped the festival secure government grants and slowly new partnerships formed. Fast forward to today and it is part of Tourism and Events Queensland’s Destination Events Program, featuring on the It’s Live! in Queensland events calendar, worth $800 million to the state’s economy in 2019.

The Whitsundays’ premier reef operator Cruise Whitsundays has taken up the mantle of platinum partner and the Whitsunday Coast Airport has partnered on the now famous fireworks night. With the help of a Whitsunday Regional Council Special Projects Grant and the generosity of Brisbane-based creative agency ‘Nick Did This’, the festival has re-branded to the ‘Great Barrier Reef Festival’, complete with a fresh, new look.

“I think it’s fantastic,” David said. “Really, the Great Barrier Reef Festival is its correct and proper name. “It’s now 10 times bigger than it was, more people come to the area for it, more wealth comes to the area and everybody does better.”

The 2019 Great Barrier Reef Festival will be held from August 1-4.