Get set for a night of side-splitting comedy to launch the 2019 Great Barrier Reef Festival, brought to you by our new sponsor Fish D-vine.  The fun and frivolity will be hosted at their famous seafood restaurant and Rum Bar for the first time, with plenty of room to sit or stand.

Fish D’Vine’s bar will be open throughout the Gala – come early from work and collect your free drink and delicious fish and chips included in your ticket price (non-fish alternative available).  Further drinks and snacks will be available for purchase during the evening.

This year’s awesome line-up of great comedians include: 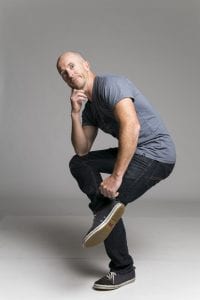 Gary is an accomplished stand-up comedian, actor, writer and film director and has performed all around the world from Singapore to Paris, to New York and London. He has performed at all the major Comedy Festivals including Edinburgh, Melbourne and Sydney.

With Gary’s fun, affable style and sharp wit he has made numerous television appearances including, Spicks and Specks, The Footy Show, Rove, The Nation, Studio 10 and early in his career (when he had hair) hosted Candid Camera on Channel 10.

Gary began his foray into comedy as a writer for 2DayFM’s Morning Crew, graduating to host his own nightly programme – The Late Show with Gary Eck, he can be heard regularly on Richard Glover’s Thank God It’s Friday on ABC 2. Gary has also been nominated for an Aria Award for his comedy album, The Hollywood Motel

Gary had the audience in the palm of his hand. Very professional, funny till it hurt and a fabulous result! I would be more than happy to have Gary on all my events. LOUISE SCHWEIKER, CI EVENTS

Since the age of seventeen Greg Sullivan has been honing his skills as a comedic writer and performer. His first paid stand up gig on his nineteenth birthday paved the way to a job writing for Triple M radio when he was twenty one. By age twenty five he had made several national television appearances on Foxtel and all the free to air networks and been invited to perform in a showcase of Australian talent at The Hollywood Improv.

He has also hosted the top rating Triple M breakfast show The Cage for more than 8 years and made several appearances on The Project.  Since then he has headlined shows in Singapore, Malaysia, Indonesia and Hong Kong, as well as regularly closing the show at The Sit Down Comedy Club and Sydney’s Original Comedy Store.

These days he splits his time between touring the world and collaborating on various television and movie projects. He can do completely clean shows for toddlers and grannies one night and win over inner city hipsters the next.

Not to be outdone by the main acts, MC for the night is Fish D’Vine’s very own comedian, Matt Isabella, who won his divisions at the Melbourne International Comedy Festival’s Raw Comedy, 2018.

Bring your friends along for this fabulous event at the Fish D’vine restaurant and bar.

Bookings are closed for this event.